For many people, it might look cruel to see a Frenchie wearing a muzzle. At the same time, it can be a controversial topic because people often consider it’s a sign that a dog shows aggressive behavior. However, a French bulldog muzzle should never be used to punish a dog but only to prevent him/her from expressing certain behavior. Let’s find out the reasons when is Frenchie allowed to wear a muzzle.

When should a French bulldog wear a muzzle?

If your Frenchie had surgery or an injury, a muzzle can prevent him from chewing and biting body parts. Developing further injuries can only worsen the condition and cause infections.

Unfortunately, chewing and licking body parts, especially paws is a common sign of an allergy. If your dog suffers from environmental allergies, he’ll tend to chew and bite the irritated skin to release the pain.

Yeast infection in French bulldogs can spread all over the body, and it usually occurs due to an imbalanced immunity. Therefore, by using a French bulldog muzzle, you’ll prevent him from developing wounds and cuts.

Since many dogs become frightened and tend to show aggressive behavior from the moment they step into the exam room, it would be a good idea to put a muzzle on your dog’s head.

Unfortunately, not all dogs have calm-tempered nature. Speaking generally, French bulldogs have friendly, lively, and outgoing personalities that fir well into any environment. However, if a dog is not properly socialized, or you’ve adopted an adult Frenchie, he’ll likely show aggressive behavior.


Therefore, a French bulldog muzzle can be used in public places when you take your dog for a stroll. Aside from this, you should also perform obedience training lessons and to teach him a friendly behavior.

To muzzle or not to muzzle?

Since French bulldogs have brachycephalic skulls, it’s essential to find the muzzle that will fit their muzzle properly. It should allow a dog to breathe freely and not to cause skin irritations and cuts around the nose and eyes.

Wearing a muzzle represent the safest way to prevent bites, chewing, and further injuries due to a surgery or a skin issue.

What is the best muzzle for a French bulldog?

The following French bulldog muzzle is made of breathable mesh webbing. It features soft edges around a Frenchie’s nose and eyes. The muzzle serves to prevent your dog from biting and chewing, but allows a dog to drink water. Without these opening, the muzzle will scratch the nose area.

The muzzle features 3 holes (for eyes and nose). It doesn’t restrict vision, water drinking, and allows smooth breathing. It is carefully crafted for brachycephalic skull dogs such as Frenchies, Boston terriers, and Pugs. The adjustable nylon strap allows you to customize the fit and quick-release buckle for a comfortable touch and easy to use. 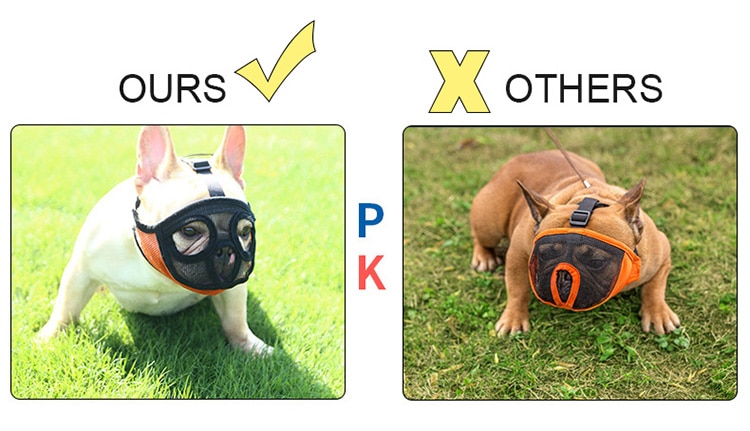