Frenchies take the world by storm! Their silly personalities, iconic appearances, and huge hearts are something that will steal everyone's attention. In 2018, French Bulldogs took the 4th place in homes all over the USA and the 1st place in NYC.

These famous and glamorous city dwellers easily adapt to any kind of environment and act friendly with people, kids, and even unknown dogs. In other words, they know how to deal with anyone.

Thanks to the celebrity trend of owning French bulldogs, we predict that they are soon going to take the 1st place in homes all over the world. It's time to take Labrador Retrievers off the throne!

If you already made a decision to own a Frenchie, then you are probably thinking to give him/her a name that will fit his lively personality and unique appearance. That's why we decided to present you 100 most popular French bulldog names of all times.

From celebrity Frenchies to famous Instagram and history stars, these French bulldog names will definitely thrill you!

Asia is not only a famous Instagram star (she has more than 236k followers), but also lives with the World's most popular singer and actress Lady Gaga. Besides Alicia, Lady Gaga is the owner of 2 other Frenchies called Koji and Gustavo.

In addition to massive Internet fame, Lady Gaga has also secured a modeling contract for her small dog Miss Asia Kinney, with COACH. She can be seen sporting a trendy collar as part of the “Coach Pups” Campaign.

Gamin de Pycombe was a male French bulldog that was born in January 1910.  His owner, Robert Williams Daniel, took him on the Titanic and while  Robert survived the sinking, unfortunately, Gamin did not. Gamin was bred by the Gwendoline Romilly of what would later be the “Taplow” kennel. He was sired by CH Charlemagne of Amersham, a French import to Britain who became Britain’s first pied champion Frenchie, and who later was the first Frenchie to be a champion in both the UK and the USA.Mr.Daniel had bought the dog in England for a very high price of £150 (about £11,000 or $17,000 in today’s prices).

The World famous Desperate Housewife, Eva Longoria, is a proud owner of a Frenchie boy named Popeye since 2015.

Sadly back in 2015, Dwayne Johnson’s Frenchie Brutus (shown here on the left) needed to be put asleep after eating a toxic mushroom. Thankfully he still owns Hobbs (on the right). 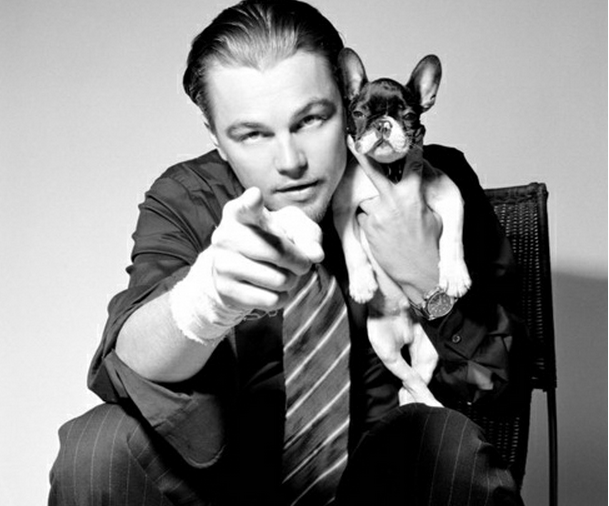 We hope you've found the right name for your Frenchie. In the end, it depends only on you. Your dog's coat color, temperament, and style will definitely affect your final decision. On the other hand, many people follow the trends set up by their favorite celebrities.

Whatever the decision you make, the only important thing is to provide your furry gremlin with plenty of love, best care, and quality nutrition. Your French bulldog's quality of life will always depend on these 3 rules.